The following is a description by David Shepherd (co-founder of Compass with Paul Sills) of the first Improvisation Olympics match at the Space for Innovative Development in New York City. David and Howard Jerome created the Improvisation Olympics in 1972. Howard later formed the Canadian Improv Games, the high school version of the Olympics, with Jamie “Willie” Wyllie in 1977.


A SPORT IS BORN! 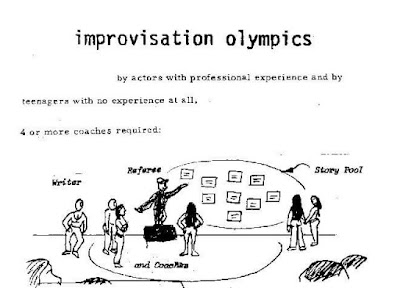 In the pre-game warmups fans joined pros to play out where they’d like to be and who they’d like to be there.  Fans also suggested themes on Story Starter Cards, which were posted on the cork wall by referee Arthur Field. 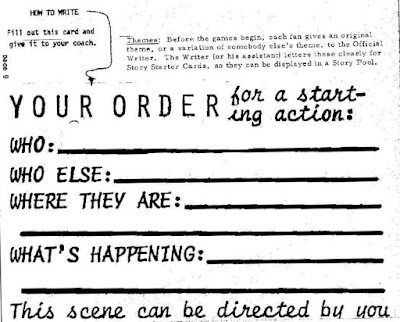 At 7:30, Field explained the rules and introduced the teams. The coin flip was won by Jerome, who opted to play second. Shepherd’s SOULS then picked their first theme from the cork wall. Teacher Accused by his Students of Turning them in for Drugs.  Shepherd directed briskly. 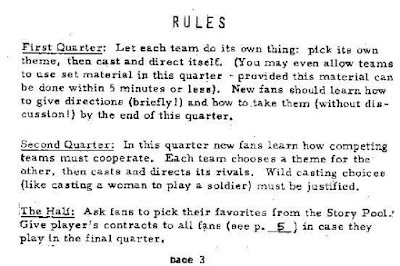 The BOMBERS now chose Pregnant 15-year old Returning Home.  In the director’s slot, Jerome switched the identity of the man the pregnant girl finally marries. His players followed through to a sardonic blackout, and the BOMBERS surged into a comfortable lead: 5-1. 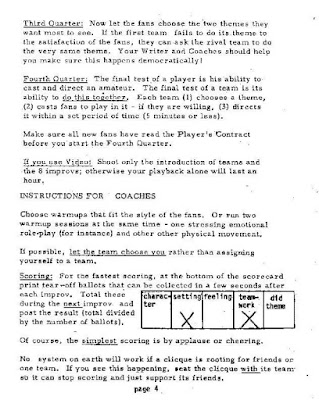 In the second quarter, SOULS took to the video-camera with Neurotic Mother telling Her Son the Facts of Life.  It was now the BOMBERS turn to direct: “Mother come on stronger with your son!” Susan Williams’ response to this hot potato provoked the deepest laughter of the night. SOULS then directed BOMBERS in When Men Get Liberated Enough to Let Women Go to Work.

At the half, the SOULS trailed by 4 points. However, their morale was high enough to do a TV commercial set in a hospital, where a man wisely buys life insurance before entering surgery.  Shepherd played the patient as a deaf 90 – to Glen Allen’s fast talking salesman. 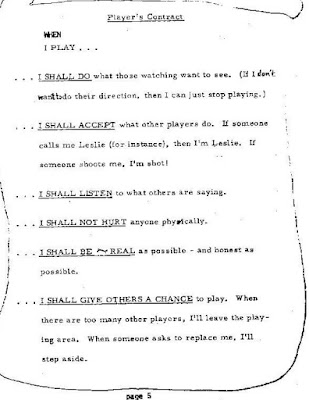 For the third quarter, fans chose one theme for both teams to play:  Mother Tells Daughter why Daddy Isn’t Coming Home.  The BOMBERS led off with fans directing Claire Michaels to be 7 years old, then 2 and finally a triumphant 15.  For the SOULS, Sydney Johnson scored heavily as a “mother,” a swinging mother,” a “grandmother,” and a “swinging grandmother.”  Even so, the BOMBERS picked up so many points that Shepherd conceded for the SOULS. “We’re going back into training,” he announced before settling down to a video playback of the game. 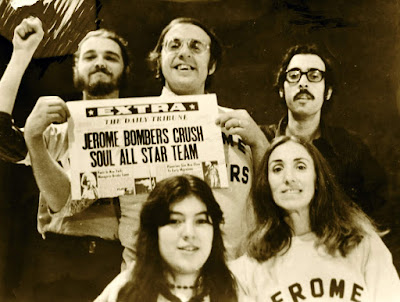 Jerome, captain of the BOMBERS, said in a victory interview, “A lot of things that were not clear in play became clear in replay – – a lot of content.  The SOULS were strong in the closeup.”


When asked to analyze the game, Referee Field remarked: “The BOMBERS had better dialog. Claire Michaels played strongly — for comedy — and with the backing of Jon Tanner, the BOMBERS had heavier skills.  The SOULS limited the time-on-camera of their strongest player, Shepherd, who was not playing to win!  Themes suggested by the fans were all lousy — even mine!  I’m surprised the teams made so much of them.” 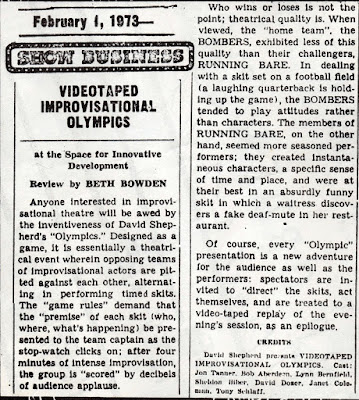 Michael Golding is an improv teacher, writer and director who participated in the evolution of the Improv Olympics, the Canadian Improv Games and created the Insight Theatre Company for Planned Parenthood, Ottawa. He is currently a faculty member at Compton College working with at-risk teens and traditional students. Michael was the artistic director of the Comic Strip Improv Group in New York City and co-produced and wrote the documentary “David Shepherd: A Lifetime of Improvisational Theatre.”  His book, “Listen Harder,” a collection of essays, curriculum and memorabilia on improvisation and educational theatre is available on Amazon.