We often state how long we’ve been doing improvisation for in years as it’s a simple way of summing up our ability, but it’s pretty easy to tell how much improv someone has done or what level they are at in the first warm up game.

Brand new: Visibly worried about getting the game wrong, apologising facially or out loud. Telling other people off when they messed up the rules. Taking ages to pass a clap around. Laughing quite a lot as they play, part fear and part exhilaration.

Some improv: Broadcasting that they have done this game before. “Ah yes” or checking in with the teacher/coach about the version they know, ‘helping’ others get the exercise when they didn’t ask.

Intermediate: Playing the game to the best of their ability and not worrying too much if they get it wrong. Playing probably as fast/well as they can, but right on the edge because they know nothing bad happens if they miss a clap or drop the game ball.

Experienced: They can already play this game, or if they haven’t they’re quick to understand the aim and the rules. They are keen to have a go, not have it explained loads.

Pro: As with intermediate and experienced, but with the added extra that when they or someone else messes up, they automatically make it part of the game. They thoroughly enjoy the mess up and the fact that they’re being challenged.

It takes a while for beginners to dial down the huge part of themselves that is worrying about how they look when they get stuff ‘wrong’ in improvisation. After that stage, they have gotten used to being observed, but they miss obvious things in scenes like being named, where they are or what the relationship is. Once that’s nailed down (and it can take years) the next stage is subtext; what’s going on beneath the words, plus a myriad of game and pattern moves. After all that, pros are bringing their own selves to the stage, raw and truthful, confident in silence, 100% leaning into any offer from their partner without auditioning that idea and also having a ball. 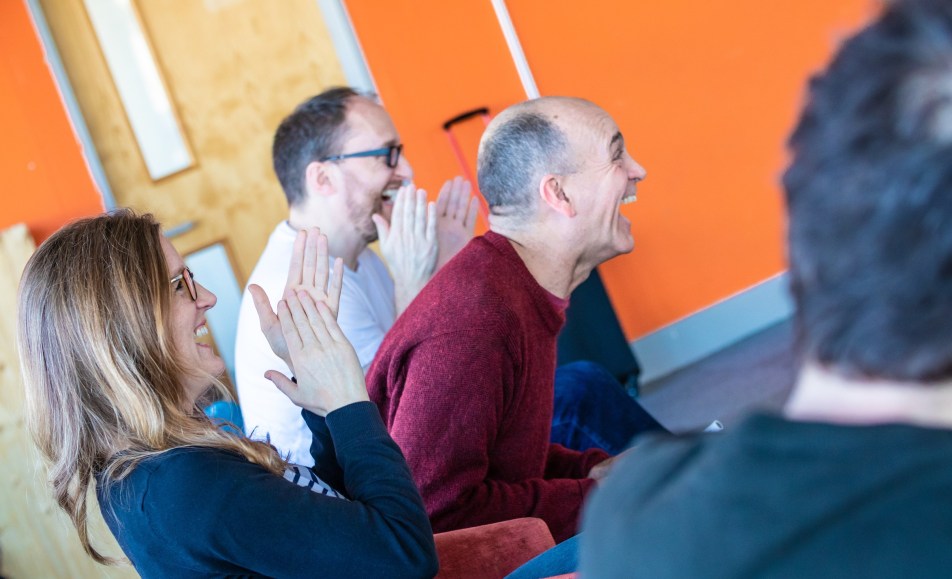