“Some of my students are wearing masks in class, because trying to remember names when you’re in your sixties isn’t challenging enough.”  March 6, 2020 journal entry.

I am a faculty member at Compton College in Los Angeles where I teach Theatre Appreciation to college and high school students. Taught primarily through theatre games, the students become an ensemble, created by their values and interests. For over twenty years, this approach has been enormously successful, particularly with at-risk populations. In the age of texting and social media, which diminishes interpersonal skills, a learning-by-doing approach trumps lecturing and coerces students to be in the moment.

On March 19, 2020, an executive order directed all Californians to stay home, except to go to an essential job or to shop for essential needs. A week later, Compton College announced that all college and high school courses were moving to alternative methods of instruction. Initially, I felt that my courses would not survive the transition. I was assigned three for the current semester, two high school, one college. Certainly I could provide online assignments, but so much of what I do is based on face-to-face interaction, connecting students with each other.

My concern was short lived, when it occurred to me that Life-Play, the last format I worked on with my late friend and mentor David Shepherd (co-creator of Compass and Improv Olympics) involved a collection of  theatre games played on the phone or online with video turned off. A player, guided by another player, explores aspects of his/her life – a made up dream, a recent event, a strong feeling, an ideal meal. Stories and poems are co-created and beliefs are examined. The results were often surprising and revelatory.
Ironically, the first format I worked on with David, Responsive Scene Radio Show, was also a verbal one. The listening audience for the show called in with scene suggestions for the studio actors to improvise. Callers could also play, direct, or just listen in. Perfect for Zoom conferences where participants might be intimidated being on camera. An audio only session is also more intimate. I felt a little more confident having two strong resources to draw from and looked forward to interacting with my students again after a two week break.

April 1, 2020.
First week of teaching my courses online via Zoom and so far the results have been surprisingly positive. In addition to David’s games, I’m using a few of my own design. Essentially, I’m now the host of a call-in radio show. On a therapeutic level, the sessions have been a release for the students in exploring the weeks leading up to the quarantine and how they’re now coping with the isolation. That just happened organically. It’s hard to ignore the pandemic elephant in the room. After being incarcerated for two weeks, the students are grateful that they can reconnect with each other online and continue working towards my objective of transforming them into an ensemble. The audio only sessions are encouraging the more self-conscious students to participate.

April 13, 2020
I’m on Spring break this week, which sucks, because teaching online via Zoom provided needed structure in my isolation. It also brought me back to my roots with David’s approach in utilizing improvisation as a people’s theatre to correct ailing communities.

During the warm-up portion of the workshops, students share how their lives have changed since self-quarantining, which I use as a springboard for scenes, monologues and games. The quality of play has become more realistic, as we explore siblings slowly getting on each other’s nerve’s over a month’s time, a single mother suddenly having to home-school her kids, parents who work in grocery stores and hospitals distancing themselves from their families at home, and of course, the paucity of toilet paper.

We have also been using the workshops to explore the future once the quarantine has ended; first party, date, trip, meal in a restaurant. One scene was set sixty years in the future, where grandparents described to their grandchildren what life was like in 2020. What I originally thought was going to be a disastrous situation switching over to online instruction, has turned into one of the more exciting periods of my teaching career.

I do miss the face-to-face interaction. I don’t miss the commute.

April 22, 2020
Today in my high school online theatre workshop, a student had an idea on how to play “Zip, Zap, Zop” a physical pass the energy game as a verbal warm-up. Focusing on an aural impulse rather than a visual one, a player starts with calling out “Zip!” followed by the name of the player he/she is passing the impulse to. That player responds with “Zap!” and name of a player who is next. Then, “Zop” and the name of a player to start from the beginning. It went like this;

Okay, the first round wasn’t perfect, as is often the case in the physical workshops. So, we started slowly, increasing the pace once they got the hang of it. It ended up working quite well. Inspired by my student’s innovation, I am encouraging the class to come up with ideas on how to transform some of their favorite physical games into verbal ones.

May 4, 2020
Never Say (a Life-Play game) – express an emotion to someone from your world, that you would never express in real life. During today’s online theatre appreciation workshop, Brisa, a shy, soft-spoken high school student, volunteered to play this game. she took a breath, and what emanated from my speakers sounded like a feral growl; “You cheap, bald, four-eyed, cheating bastard!” Unexpectedly, Brisa transformed into Susie Essman from Curb Your Enthusiasm. Several dogs in my neighborhood start barking. 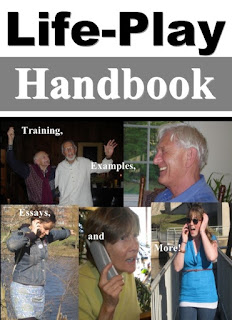 May 11, 2020
After yesterday’s Zoom session with one of my high school groups (actually middle schoolers) five students wanted to stay online to hang with each other for awhile.  Not realizing that as the host I could leave without ending the meeting I said “sure,” took myself off video, muted mic, then went into the kitchen to do dishes, Hearing their voices from another room was comforting.  The apartment didn’t feel empty.

An hour later, they were still at it. I couldn’t resist eavesdropping a little. Other than some commiseration about missing friends and not being able to go out, the conversation covered typical teenage topics: favorite tv shows, movies, mutual friends, music, video games, other classes. Two of the students had a separate nonverbal conversation going with a sign language they created.  One shared her artwork onscreen. It was a reassuring sense of normalcy for me. I was moved by how they were adapting and their resilience. I wanted to hug them, and was instantly saddened by the reality that I couldn’t.

While my workshops are conducted without video, we do check in with each other on camera at the beginning and end of session. I’m going to start making it a regular thing that they can stay online after the workshop if they wish. I’ll assign a host and take my leave. It’s good to know they’re out there maintaining a semblance of community.

May 20, 2020
I’m in the final two weeks of the semester. As was the case with the physical workshops, students are bringing in their final projects; conducting games I have not covered and a scene with a partner that was developed away from class. We’re continuing to experiment. Illustrations are created during story games. Chat window is used for directions and scene ideas. The quarantine is affecting the energy level of  students. Many are up late binge watching. Some have admitted that they’re attending the workshops from their beds.

It has been a semester of trial and error. I’ve been offered an online summer course, which is an opportunity to further perfect my online curriculum. It’s possible that the college will return to physical classes in the Fall and a mountain of concerns has been raised by instructors and students. Class sizes, availability of masks, gloves and sanitizers. How effectively will the space be cleaned? It’s already overwhelming.

New obstacles will present themselves. Social distancing will exclude many theatre games, Viola Spolin’s Contact and Kitty Wants A Corner are two that come to mind. I think I’m up to the challenge. My students certainly are. They’re an innovative bunch.

Michael Golding is a writer, director, performer and teacher. He participated in the evolution of the Improv Olympics, the Canadian Improv Games and directed the Comic Strip Improv Group and  Planned Parenthood’s Insight Theatre Company. Michael is the author of  “Listen Harder” a collection of essays, curriculum and memorabilia on improvisation and educational theatre, and co-produced and wrote the documentary “David Shepherd: A Lifetime of Improvisational Theatre.”  Michael can be contacted at migaluch@yahoo.com