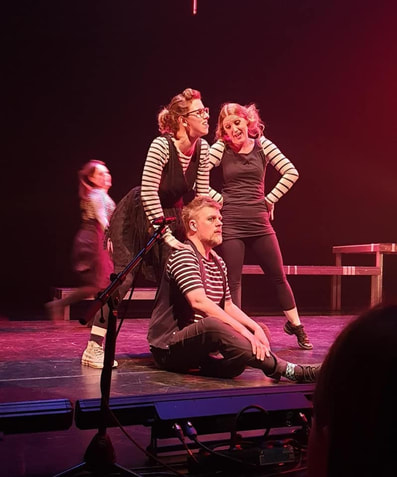 I’m taking a Science of Well-Being course online with Yale. Last night I did a fabulous show with The Maydays at IMPRO Amsterdam. We got a standing ovation and were called back on stage to bow again. I had loads of compliments in the bar and yet, all I wanted to do was go back to my AirB&B and feel disappointed with myself. So what happened?
​
Well, according to my Science of Well-Being course, my salient reference points were kicking me in the butt. Looking at the happiness levels of Olympic silver medalists next to bronze medalists, bronze medalists are often happier. The silver medalist is kind of bummed that they just missed out on gold and the bronze medalist is excited to be placed.

We had a technical issue in the show that meant I couldn’t hear our musical director from on stage. I pride myself on being good at making up songs and yet I couldn’t hear the rhythm or the pitch of what Joe was playing. Even though we sang less songs because of it and the story and other aspects of the show were really cool, I went away feeling like a disappointed silver medalist. I knew that if the music on stage had been audible I would have been really pleased with the show. I could have been better; I was just shy of gold.

In contrast I did a brand new show with my friend Ed the night before. We’d only ever done a handful of 10-20 minute shows previously and in the last one we did we discovered a lot of things that needed work. Tuesday’s show would be 45 minutes long and have an audience of some of the world’s leading improvisers. I was nervous all day. Doing it brilliantly seemed like an outside chance. We had spent time with an intimacy coach and practised physical theatre/dance lifts and holds. We talked about the difference between a short show and our longer spot. On the night: we nailed it. I couldn’t sleep because I was so happy with how it went. It probably wasn’t any better in comparison to the Maydays show the following night. My salient reference points for both the shows were different, so even though the shows and my performances in those shows were likely of similar competency, I was thrilled with one and sad about the other.
​
The data isn’t there for improv, but I do wonder if every time we do a particular show, we move our bar for what we imagine the quality of show would need to be to make us happy.
One study shows that whatever our financial income is, we always believe that the income we need to be happy is higher than we are making now. For every dollar your income goes up, your ‘required income’ goes up 1.4 dollars!

Being present and being content with a show no matter what happened and how good it was is the lesson.

It might take a lifetime, but I’m striving for it.

Medvec et al. (1995). When less is more: Counterfactual thinking and satisfaction among Olympic medalists. Journal of Personality and Social Psychology, 69(4), 603–610.
Our minds don’t think in terms of absolutes; our minds judge to relative reference points.

Lyubomirsky (2007). The How of Happiness: A New Approach to Getting the Life You Want. New York, NY: Penguin Books. Page 44.
This book tells us salary goals rise as salary rises